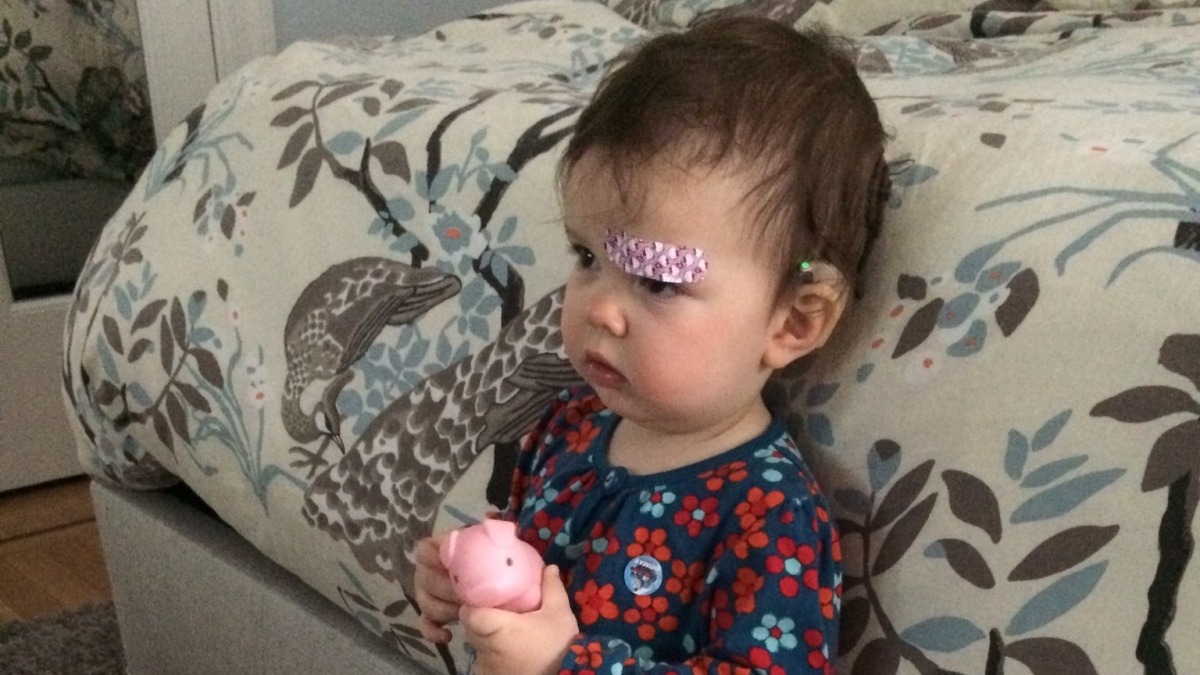 Sonya recently discovered a new game. It’s one she tends to play when frustrated or tired. She will look at me mischievously, then will pull off her CIs and (while smiling) drop or throw them on the floor. As soon as she sees me get up to put them back on her head, that’s her cue to take off running and laughing hysterically.

Unfortunately, on Tuesday, Sonya ran full speed into our radiator, face first. I don’t think I will ever be able to erase the sound of her little head hitting the wooden radiator cover from my memory, nor the guilt I feel that I could have prevented it.

I wasn’t sure how severe the wound was. She was crying like crazy, but calmed after a few minutes. I didn’t see much blood either. Just a cut that ran an inch length-wise above her eye, crossing her eyebrow diagonally.

I immediately FaceTimed my dad, a physician, who told me to call our pediatrician’s office. They told me to come by right away so that Sonya’s doctor could take a look, and we were there 10 minutes later.

By the time we got there, the bleeding had picked up speed. It was now running down her little cheek. Gotta love our pediatrician who, when entering the examination room to see me in shock and Sonya bleeding, asked calmly, “So, how has your day been?”

After cleaning and examining the wound, he referred us to a plastic surgeon on the Upper East Side – who he said would be able to stitch the wound without impacting the shape of her eyebrow.

I had no idea what was in store. Watching Sonya get stitches was one of the top three (if not the) worst moment of my life so far. Since she is so little, they decided not to sedate her, rather give her local anesthetic – which needed to be injected by needle to the affected site. Sonya screamed in pain. Once the pain relievers went into effect, Sonya still felt the tension of the surgery, so she continued to scream and cry “Mama!” and “Dada!” I meanwhile, tried to hold her down with the help of another nurse to make sure the doctor was able to do his job. Several internal stitches and seven external stitches later, we were done. Sonya got her Thomas the Tank Engine stickers and we went home.

Sonya fell asleep in the Uber back to our apartment, and stayed asleep for a couple hours that afternoon. It wasn’t until she was in her crib asleep that the events of the day hit me, and I am still recovering. Sonya meanwhile, seems to be doing okay with her wound. She points at it from time to time, and says something that sounds like “bobo.” Today, I put a band-aid on her baby doll’s head, and told her that in one week, it would be all better – which is when we will go back to the surgeon to remove the stitches.

So it seems, that Sonya will need to go back to wearing headbands. Hopefully, they prevent her from removing her CIs and taking off like a mad person. I am also further baby-proofing our apartment…Would love to hear any other ideas on how parents kept baby’s CIs on during this toddler phase.