In a few weeks, we will head to Italy for vacation. We spent some time on the Amalfi Coast last summer, and we have since decided that Italy is a perfect destination. Beautiful culture, delicious food and lovely people. The only downside is that we have to get there. Ten hours on a plane is not easy for anyone, but for a child with cochlear implants, the background noise makes it nearly impossible to hear anything. Thankfully, we learned that Cochlear’s Mini Mic is a wonderful solution.

We wear the Mini Mic while traveling, which allows Sonya to hear our voice over the loud background noises of the airport and airplane. We also connect it to her iPad so that she can hear her videos – similar to wearing headphones. In this post, I’ll walk you through how to connect the Mini Mic to an iPad or iPhone so that your child can listen to a video similar to wearing headphones.

Double-sided Headphone Jack Cord (not sure what the official name is but this is what it looks like):

And your child’s processors and iPad. So here is everything:

Step 1: Pair your Mini Mic to the Processors and to the Remote. Cochlear has step by step instructions on how to do that here.

Step 2: Turn on the Mini Mic. The switch is on its side. A green light will flash on its top to show it is working.

Step 4: Change the Settings on the Remote to “Stream” From the home screen, push the right arrow until you come to the “Stream” screen. You should see Mini Mic as an option if you paired it correctly. Just push the down arrow and select Mini Mic.

It typically takes a moment for the processors to connect. You will see they are connected because when the iPad or iPhone video is playing, blue lights (rather than green) will flicker on the front ends of the processors.

That’s it. So (relatively) easy. And it will get easier with practice. Feel free to let me know if you have any questions!

END_OF_DOCUMENT_TOKEN_TO_BE_REPLACED 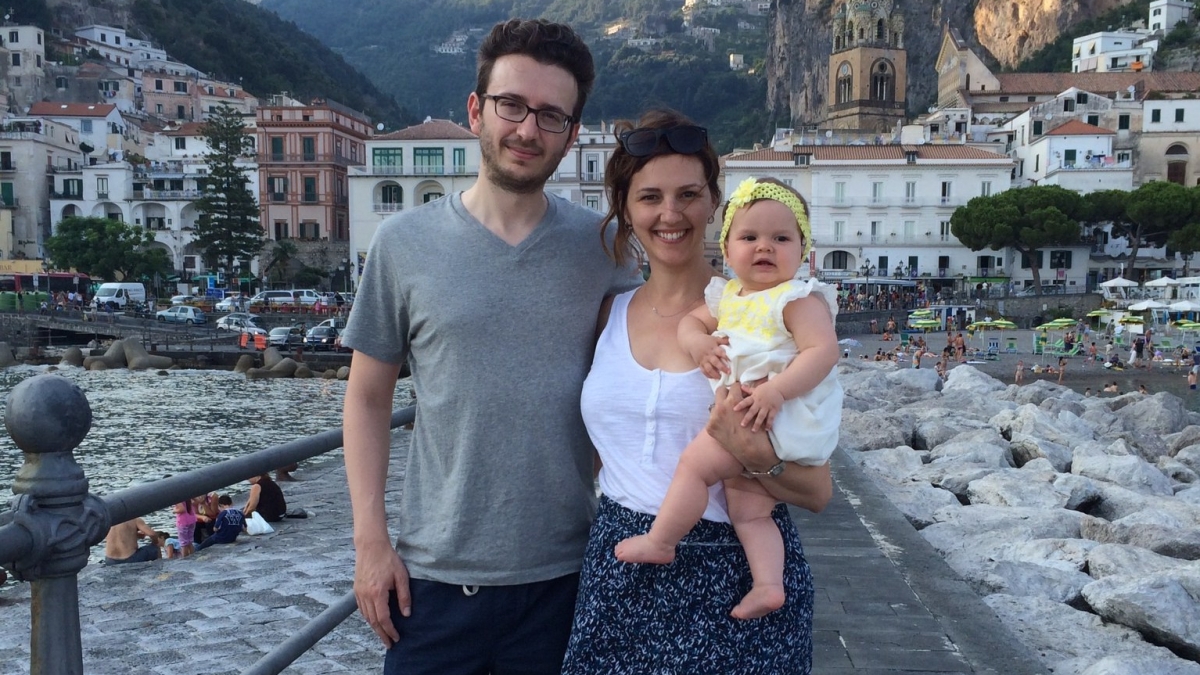 When I notified friends and family that we were planning a trip to the Amalfi Coast this summer, several people voiced their concerns. “A vacation is not a vacation with a baby – it’s just a trip,” one friend told me. “You aren’t going to sleep because the baby won’t get used to the time difference. Above all – you won’t be able to enjoy your vacation!” Another friend told me that we should not go this year because of Sonya’s surgery. “She could get an ear infection,” she warned “And then you would be in a foreign country with a foreign hospital and foreign doctors!” These concerns had an impact on me. Rather than feel excited about our trip, I increasingly felt anxious.

Prior to leaving, I consulted with our team of speech therapists, audiologists and surgeons. The overall consensus was that we should ABSOLUTELY travel with Sonya. “You need to take time for yourselves and enjoy being a family,” our EI service coordinator wisely told me.

For two and-a-half weeks, we toured Amalfi, Capri and Positano, Italy. It was not an easy trip (especially given that most of these towns were not stroller friendly) – however – it was one of the BEST trips I have ever been on and I know I will cherish the memories we made for the rest of my life.  That said, traveling with a baby is difficult. Traveling with a baby who has cochlear implants (I think) is even more challenging – so here is a list of tips that I hope others in our situation will find helpful!

Forget the stroller – bring a baby carrier instead: Note – this tip is particular to the Southern coast of Italy where the streets are typically paved with cobblestone and cities are built into the hills with hundreds of stairs. The stroller was most helpful in the airport – but aside from that time, we didn’t really need it at all and it collected dust in our hotel room. We used the Ergo Original Baby Carrier – which was comfortable and very easy to use.

We also decided NOT to bring a baby backpack. Lots of people recommended we do so – and we even borrowed one from a friend before our trip. We finally decided against it since we were bringing so much stuff already. We didn’t miss it.

Get on a schedule as soon as you can (but be flexible): This proved critical for acclimating to the time change. Our schedule revolved around three nap times (one mid morning, one early afternoon and one before dinner). We also kept Sonya from sleeping more than two hours per nap, to help her get used to the time change. It only took two days for her to adjust.

Of course it wasn’t possible to be strict about the schedule either. A few nights, we kept Sonya out  so that we could enjoy dinner with family. It made me nervous to do this, but we allowed her to sleep in the next day – and I didn’t notice much of an issue in terms of her happiness when we did this occasionally.

Embrace cultural differences: Italians are the warmest people. They also LOVE babies. It seemed like every Italian we passed would look at Sonya and call out “bellissimo!” “principessa!”  or “bombola!” Many would go so far as to pinch her cheeks or hold her hand. At first I grimaced when this happened. But, eventually just accepted the fact that strangers were touching Sonya – and it was okay. Once I embraced this difference, I realized how lovely the Italian culture really is. So warm and affectionate! We Americans can be so cold sometimes…

Integrate speech therapy games into your vacation: One game that worked especially well was the “go go” game. In the pool, I would hold Sonya while Yan was a few yards away. Yan would repeat Sonya’s name until she turned herself to look at him (helping her to recognize her name). Once she saw her dad, Yan and I would both say “go! go! go!” as I gently bopped her in the water towards him. Then we repeated with Yan holding Sonya and me saying her name.

Now that Sonya can crawl, another game we played involved placing two different farm animals within crawling distance of Sonya. I would ask her, “which one says moo?” Sonya then would crawl (sometimes!) towards the cow. Sonya’s Ba Baba Lillian bought us these awesome farm animals, which double as pool toys. She loved them.

Bring your parents – if you can!: I would be remiss not to add that we did have Yan’s parents and sister at a hotel nearby. They were the most wonderful support while in Europe, and even watched Sonya a few nights so Yan and I could get some time away or visit places that were just not kid-friendly (e.g. Pompei). I think Sonya especially enjoyed having them there so that she could get that additional time to bond. A win-win!!